Should you lie on your mortgage application?

2018 To Be A Breakout Year For FHA Buyers

FHA Approvals In Reach For More Buyers FHA loans have long been one of the most popular mortgage types available. Roughly twenty percent of all mortgage applicants will opt for an FHA loan because of its buyer-friendly guidelines according to mortgage software company...
Read More

FHA loan requirements – What do you actually know about FHA mortgages?

FHA loan requirements  To qualify for FHA loan, a mortgage borrower must meet the minimum standards of the Federal Housing Administration's mortgage program, which include showing a minimum credit score of 500; having verifiable income and employment; and, proving...
Read More

Driving south When it comes to moving, Americans largely headed south in 2017. According to new data from U-Haul, Texas was the top state for U.S. migration, while Tempe, Arizona, took the honors for the top city. Verify your new rate (Jan 18th, 2018) Leaving for the...
Read More

Will Your HELOC Payment Skyrocket In 2018?

What To Do About Your Aging Second Mortgage A home equity line of credit (HELOC) provides much-needed cash for home projects, and other financial goals. These loans are the cheapest and easiest way to tap into unused home equity. They can even cover a portion of your...
Read More

Should I Refinance? – Reduce Your Interest Rate With 2018‘s Low Rates

It's Time To Consider A Refinance Current mortgage rates are holding low. If you missed your chance to refinance your home last year, it may not be too late to secure a world-class mortgage rate. Dropping your rate by just 1.0% -- from 5.25% to 4.25% -- puts ten...
Read More

Should You Pick A 5/1 ARM Or 15-Year Fixed Loan In 2018? When mortgage rates are rising, it may seem crazy to consider a 5/1 ARM (adjustable rate mortgage) or a 15-year fixed-rate loan. After all, shouldn't you lock in the lowest possible rate for the longest possible...
Read More

Double Duty Home Improvements Most people undertake home improvements for two reasons -- to make their property more valuable, to improve energy efficiency, and to make their houses more comfortable and functional. The best renovations do more than one of these...
Read More

Should you lie on your mortgage application?

Are "white lies" okay on a mortgage application? How much harm can a little white lie on your mortgage application do? Well, quite a lot, actually. True, you're unlikely to face the maximum penalties that mortgage fraud can bring. You'd have to do something really bad...
Read More

Can’t save for a down payment? Your employer may be able to help

New tool lets companies offer down payment benefits to workers Need help saving for your down payment? Then you may want to find a new job. Thanks to a new offering from crowdfunding platform HomeFundMe, employers can now make down payments a bona fide part of their...
Read More

Your were partying on New Years Eve -- and that's okay January is well underway, and you forgot to make your resolutions. But it’s not too late. Better yet, why not make 2018 mortgage real estate resolutions that will help you buy a home quicker? Setting goals can...
Read More

Are “white lies” okay on a mortgage application?

How much harm can a little white lie on your mortgage application do? Well, quite a lot, actually.

True, you’re unlikely to face the maximum penalties that mortgage fraud can bring. You’d have to do something really bad to get 30 years in a federal penitentiary and $1,000,000 in fines. Courts reserve those for organized criminals and the worst types of industry insiders.

Those caught materially misleading their lenders could easily face probation and thousands of dollars in fines. And maybe more thousands in “restitution” (compensation for any losses). Meanwhile, if you compound your offense by mocking up fake documents, you could be facing years in jail or prison and bigger money penalties. Totally worth it, right?

Your mortgage application and the law

Let’s leave aside the really serious stuff. Most of those using mortgages for serious scams or to launder money already know (or choose to ignore) their criminality.

Often people lie or exaggerate to get a bigger loan, smaller down payment or a better mortgage rate.  Sometimes the applicant won’t get approved at all without deception.  He or she figures it’d be no big deal because they just want a house — they don’t intend to harm anyone.

The lies most commonly seen on mortgage applications concern:

Freddie Mac tells the story of an Alaskan woman, her previous employer had terminated her before she finalized her loan application. She claimed she still had the same job, and she forged a pay stub to back up her claim.

Freddie reports, “The woman was sentenced in federal court to 37 months in prison on one count of forgery, one count of computer fraud and one count of bank fraud.”

By the way, most “fraud for housing” is handled at a state level. But the FBI may have jurisdiction for crimes across state lines and those involving FHA loans or USDA mortgages.

An error on your mortgage application isn’t fraud. Virtually every criminal offense requires that you commit a guilty act (actus reus in lawyer-speak). But you must at the same time have a guilty mind (mens rea).  You don’t have a criminal mind when you make a mistake. In other words, you lack criminal intent.

That doesn’t mean you can rely on claiming obvious lies were errors. A jury is unlikely to fall for that one.

And, when you sign a mortgage application, you’re certifying that the information you’ve provided is accurate.  There’s a good chance your lender could call in your loan (make you repay it at once) even if you made a genuine mistake.

However, you have in fact defrauded lenders and their investors of the higher interest rate and fees they are entitled to, to compensate them for the additional risk that your application represents. You think you’re just trying to get a house — but in fact, you are lying and stealing. Is that who you really are — a liar and thief? Probably not.

And it may be difficult, in the face of obvious lies, to prove that you had no criminal intent.

Bad advice is no defense

Suppose the fraud isn’t your idea. Maybe your mortgage broker suggests you exaggerate. Or it might even be your loan officer.

Does their “permission” provide you with a defense against fraud charges? After all, they’re professionals, and you rely on their advice.

Sadly, not: your signature equals your liability. You may have the satisfaction of seeing them prosecuted alongside you. But just how much fun would that be?

In fact, your risk might be bigger thanks to their participation. They probably persuaded others to lie, so investigators are more likely to eventually catch them.

And, when that happens, someone’s probably going to go back through their old files; including yours. 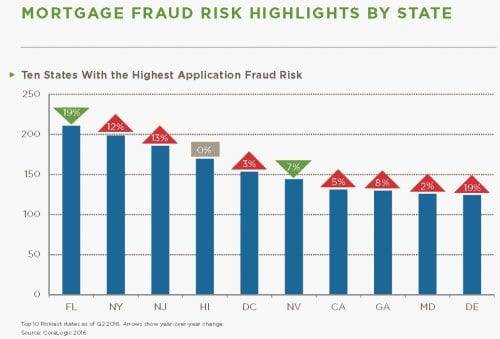 This strictness over mortgage applications may seem a bit rich to you. After all, most of us can recall a time when the mortgage industry seemed unable to care less about mortgage fraud.

Back then, few lenders made a secret of their disregard for the accuracy of loan applications. Salespeople openly persuaded completely unqualified borrowers to accept loans they couldn’t possibly afford unless their home value skyrocketed.  We now know that didn’t happen.

Do you remember “stated income” loans? Those required few or no documents to back up back up claims about employment, income or assets. With a refinance, you just signed and banked the check. Indeed, some industry insiders cynically called them “NINJA” loans: No Income, No Job or Assets.

Note that stated income loans originally came about because some quite wealthy people with excellent credit and healthy down payments had very complicated income, not always easily verified by loan processors (who were not CPAs, qualified to decern the accurate figures). But, the product eventually devolved until lenders approved borrowers with no down payment, bad credit, no assets or even a verifiable job.

What could possibly go wrong? Everything! That’s why your own application today will likely be audited.

Pointing to the past bad behavior of lenders may make you feel better personally about lying now, but it won’t cut it with a district attorney or federal prosecutor.

So, don’t even try to justify something bad by deflecting. You didn’t really think life’s fair, did you?

In spite of the risks, it looks likely mortgage fraud is increasing quickly. To be accurate, when researchers check files, they don’t try to differentiate between mistakes (both lenders’ and applicants’) and fraud: they just talk about “defects.”

The number of those defects is rising quickly. It was up 22.1 percent in November 2017 compared to the same month a year earlier. And you may think fraud rose at least in line with honest mistakes.

The data came from First American Financial Corporation. It reckons Arkansas applications contained the most defects that month, with those from Idaho and North Dakota quickly catching up. The fewest were in New Hampshire, Connecticut and Massachusetts.

A mortgage application may feel like the enemy when you’re filling it in. But it really isn’t.

True, its main job is to protect the lender, but it protects you just as much.

It will make sure you can afford the loan you’re applying for. And, if you can’t, and manage to trick someone into buying something unaffordable, you’ll likely suffer more than anybody.

Freddie Mac says, “Mortgage fraud continues to be one of the fastest growing crimes in the United States.” Lenders are responding with increasing vigilance, employing greater resources and more sophisticated detection techniques.

Of course, many offenses still go undetected.  It’s possible — maybe even likely — you could get away with a clever lie on your mortgage application.  Do you really want to take that chance?

What are today’s mortgage rates?

Many who lie on their loan applications do so to get better terms, including a lower mortgage rate. But with today’s low rates, that’s not really necessary. By simply comparing several quotes between competing lenders, you may shave more off your rate than you could by using an expensive lender and lying on your forms.